You can also access the current jobs on the official website at www.joinpakarmy.gov.pk – Below is the complete list of all Pak Army jobs for the current year where you can find information on how you can apply and register for various opportunities: 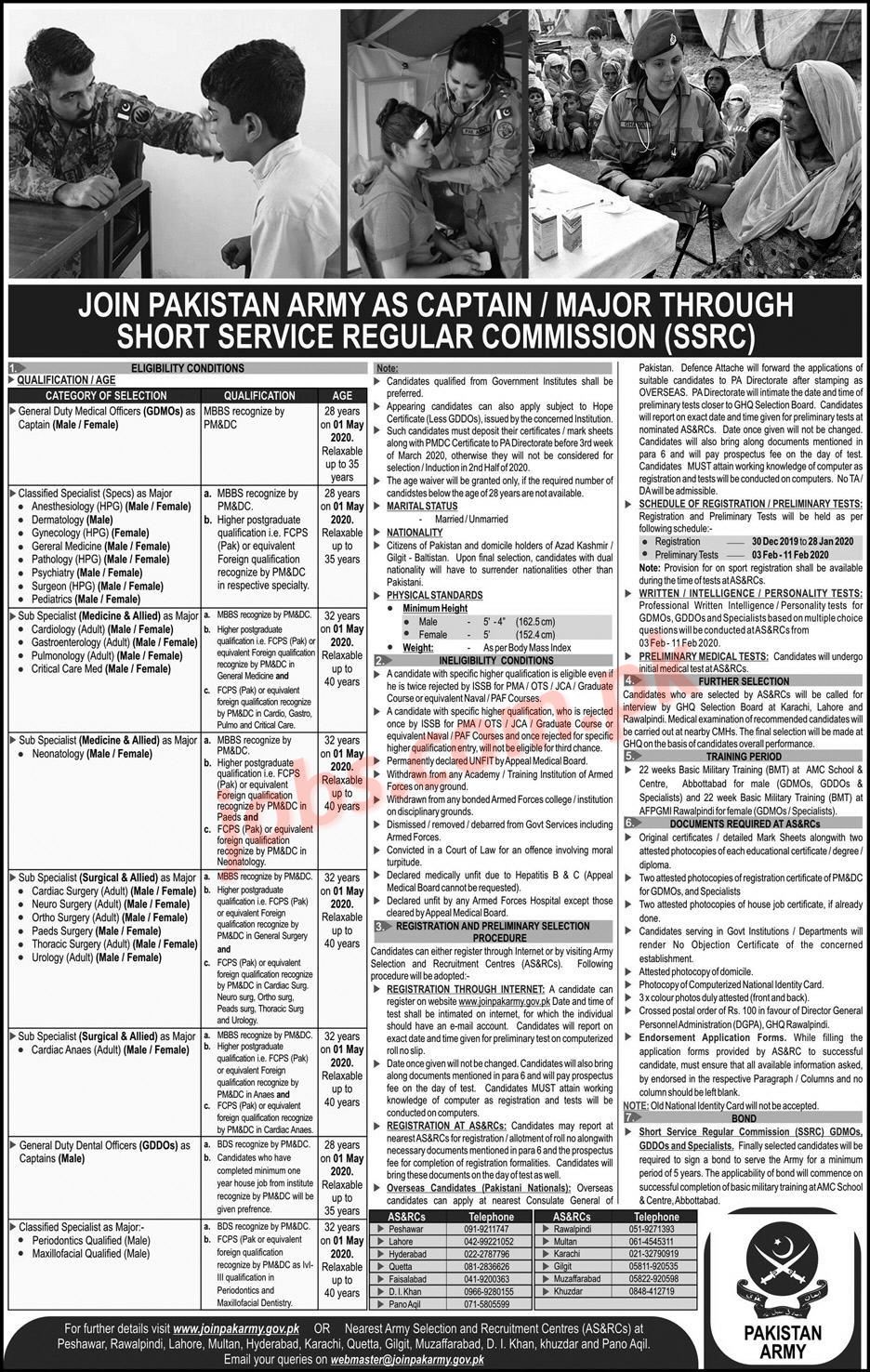 Pakistan Army has issued latest notification for citizens of Pakistan and domicile holders of AJK to join Pak Army as Captain through Direct Short Service Commission for May 2020 Entry. Here on this page you can learn everything you need to apply to join Pak Army as captain for the 2020 May Entry through Direct Short Service Commission including education, categories, age limit, physical standards and other requirements. It is important to note that online registration for Pak Army Captain posts begins on 23rd December 2019. Last date to apply is 20th January 2020. 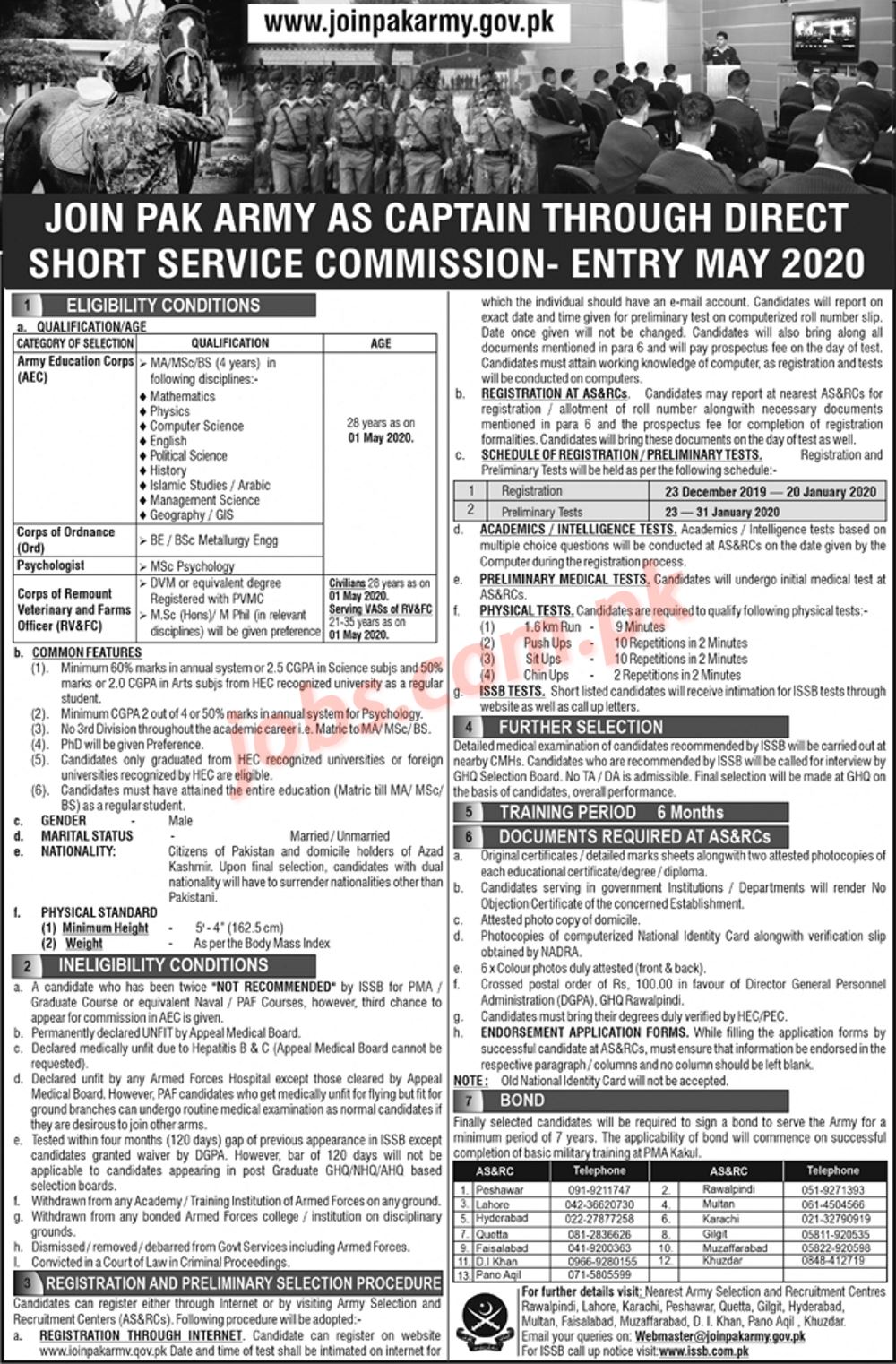 The Pakistan Army in its latest notification has announced the Lady Cadet Course (LCC-16) with 2020 entry for female candidates. Aspirants wishing to join the Pak Army as Captain can now register online beginning 9th December until 3rd January 2020. The Lady Cadet Course (LCC-16) is for female candidates only in multiple categories as shown in detail below.

Pak Army recruitment for Defence Security Force will commence in various cities tarting from 7th November 2019 till 19th February 2020. Please carefully read dates for each city and province because the recruitment team will visit different venues on specific dates. Only candidates having domicile from that region will be eligible to apply.

Candidates having Middle, Matric, Intermediate, Graduation and Masters education can join Pak Army in various branches and departments. All latest Pak Army recruitment notifications are listed here on this page with important information including educational qualification, eligibility criteria, age limit, physical standards and other qualification required for joining Pakistan Army. On this page you can learn not only about latest Pak Army jobs for civilians but also get information on how to:

Pakistan Army regularly recruits Pakistani and AJK nationals for its operations across Pakistan in Lahore, Karachi, Rawalpindi, Islamabad, Multan, Faisalabad, Peshawar, Hyderabad, Quetta and other cities in different forces and departments. Pak Army has various divisions, forces, corps, ammunition-depot located across the country for which jobs are announced every month on regular basis. Once candidates are selected under specific branch and category, they are trained in Pak Army training centers located in various cities (see complete list here). Pakistan Military Academy, Kakul is one prestigious institute for Pak Army training where officers get training after which they server the Armed Forces in Pakistan.

Aspirants who wish to join Pak Army can apply and register online on www.joinpakarmy.gov.pk – The online registration applies to recruitment done for JCOs, SSRC, Sipahi/Solder, Cadet, Captain, Major & Other categories. Candidates can apply through offline mode to other civilian vacancies as required.

Few ways you can Join Pak Army & Get Jobs

You can serve the Pakistan Army and join the ranks in multiple ways. One of the most sought after (and probably a dream for millions) is to join the Pakistan Army as Commissioned officer and PMA but if for some reason you couldn’t make it through, the Armed forces let you serve as civilian in variety of departments that include Medical, IT, Engineering, Administrative and other categories. The ISPR regularly announces these vacancies and we keep track of every update here on this page. Here are few options for you on how you can Join the Pak Army in Arms & Services branches: